A peek at of some of the adventures shared in this weeks' learning journals: Monday this week at Venture Kitley Farm and Venture Hope Cove. 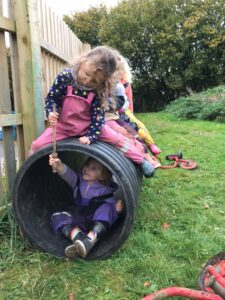 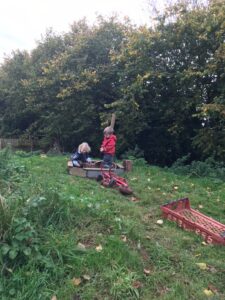 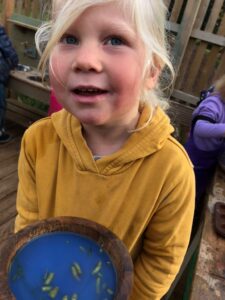 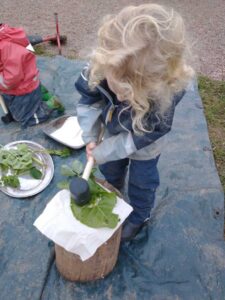 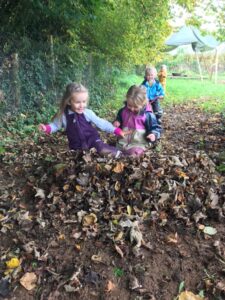 Arriving into the Venture garden fresh from the weekend, all the children had lots to get on with!

Over the weekend a fort/ castle/ pirate ship appeared at the very top of the mound. Lots of children decided it was a pirate ship and were bringing loot from far and wide to hide safely in it.

Other children noticed the magical potions in the mud kitchen, just ready to be made and turn people into all kind of magical creatures. One put in magical sound effects, saying POOF! every time she added a new ingredient.

During the day lots of children had a go at leaf bashing using the hammers and making different patterns using lots of different leaves found in the garden.

At snack time we all sat down and listened to Bear on a Bike, with some children remembering the ‘Please wait for me’ sentence and asking 'Please wait for me!' very enthusiastically along with the story.

After snack, Jess raked up a huge pile of leaves and one child tried to bury themselves in it while others threw it around and pretended it was snow! Some realised if you gently shake the tree branches, you can catch the ones which are ready to fall.

At lunch time everyone joined in with Hairy Maclary and enjoyed talking about his friend Zachary Quack.

After lunch some set to work cleaning the mud kitchen which was some task!

Other children put on fancy dress and put on a show of the Lion King. They lined up some stools and made and handed out free tickets. Good job it was free because the robber took all of our money earlier.

Other children went to work hammering nails in the tool shed and building new toys.

Some stunt bike drivers were cycling through the tunnel while others sat on top of the wobbly tunnel like rodeo riders trying to hold on to the wobbly horse.

We finished a very busy day with a digestive biscuit and learning a brand new song! 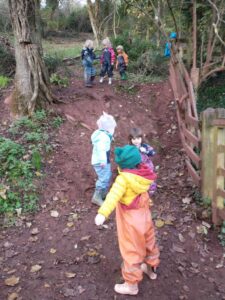 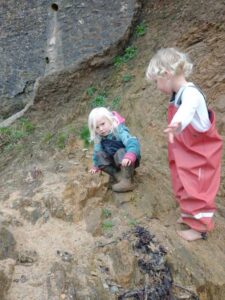 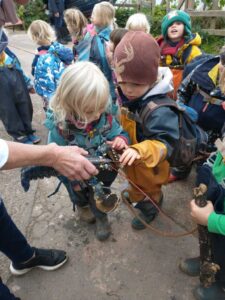 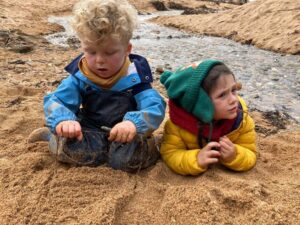 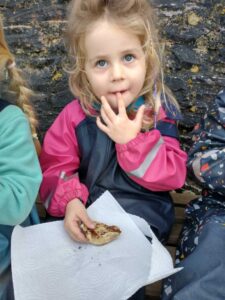 Our day began with stick collecting in the woods ready to make jingle sticks.

We then set off towards the waterfall beach but stopped half way by the slipway for snack time. There were lots of surfers in the sea so we decided to sing them a few of our songs!

We headed on over the coast path stopping along the way to see a black ladybird with orange spots, to search for their numbers on a sign and to chat to the workmen fixing the fence. When we arrived at the beach the children were quick to notice how it looked different. There was quite a steep sand bank which was very fun to try out different ways of moving up and down it, including rolling backwards and landing upside down.

The children found what they decided was a shark tooth and a big piece of metal. There was a lot of discussion about what it was and how it got there but in the end it was decided that the shark had tried to bite on the metal, thinking it was food in the sea, but it made it's tooth fall out. This then inspired a big clean of the beach!

We were lucky enough to see a lobster on the way home and found out that it was blue because of what it had eaten.

We had some yummy damper bread cooked on the stove for snack whilst watching the waves roll in!