We really enjoyed reading this beautifully written account and Natasha has very kindly allowed us to share it with you all. If any of you ever feel inclined to share your thoughts of Venture we would love to receive more parents’ views/write ups.

Please can you tell me why you chose the kindergarten? 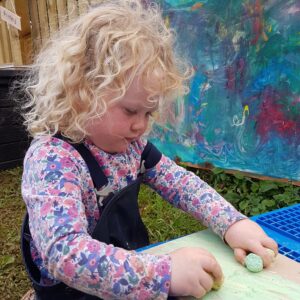 A weekend stay at an Airbnb in Kingsbridge, with a family whose son was on the waiting list for Venture Hope Cove, alerted us to this small and unusual early years setting.  It sounded Arcadian: children outdoors whatever the weather; the beach and woods their classroom; pebbles, sand and sticks their toys; rocks and trees their climbing frames.  We returned the following Thursday and witnessed for ourselves a typical afternoon on the beach at this outdoor kindergarten.  Pre-schoolers of an age that one is lead to believe will play alongside each other but rarely together were actively engaging with their peers, problem-solving in teams, being open, curious and communicative, and most importantly reaching out to our then 2.5-year-old to bring her into the fold.  The adults were notable by their quiet attentiveness, neither directing nor refereeing the play, but standing back and allowing it to unfold within a reasonable set of boundaries that the children seemed to implicitly understand.  We were (and still are) impressed by the faith the adults have in allowing these young children to test and teach themselves about their own abilities and physical limitations.  We were delighted when founders Jenny and Zoe told us that they were launching a sister kindergarten, Venture Kitley Farm in Yealmpton, the region of Devon we were scouting out as a potential place to settle.  We signed Lily up for the April 2020 start date and set about facilitating our move South West.

And what your child loves about the kindergarten? 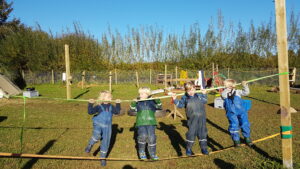 Venture Kitley Farm has a slightly different setting to Venture Hope Cove, with a tepee (rather than the latter’s Fishermen’s Reading Rooms) as a central gathering point within a dedicated green space.  Lily, despite never before having received any formal childcare, has taken to the notion of ‘her’ kindergarten, with ‘her’ tepee where she deposits her backpack every morning (packed with everything she might need for a day outdoors) and around which the daily routines revolve.  Although parental separation was initially challenging for her, every morning she nevertheless asked to go to kindergarten, to the palpable warm welcome awaiting her there.  The independence fostered at Venture suits her personality, as well as the respect afforded the children when they are for example 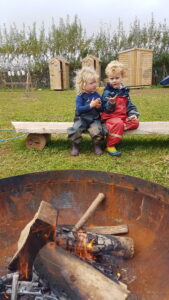 (under subtle supervision) allowed to use proper tools to carry out simple self-guided hammering, cutting and drilling tasks.  She loves venturing out for regular adventures on the ‘rope bus’, a genius device whereby the children each have a loop on a long rope to hold as they step out to explore the local tracks, fields and orchards.  Mainly for Lily however, it is the promise of playmates that draws her; in the six short weeks that the kindergarten has been open after the delays imposed by Covid-19, Lily has developed some charming friendships with the other children, undoubtedly facilitated by the hands-off approach of the adults and the spirit of kindness and cooperation nurtured among the children at Venture Kindergarten.

Read the rest of the Venture Kitley Farm newsletter here.